Design definitions quoted from Pearson's own Bill Shaw are included here along with references to other performance and design documents for your perusal.

"We asked Bill Shaw to list some of the basic design measurements and ratios that are used by the designers to define the performance characteristics of various sailing yachts. These [listed here] are some of the more common definitions, terms and ratios used by designers".NPYOA 1995 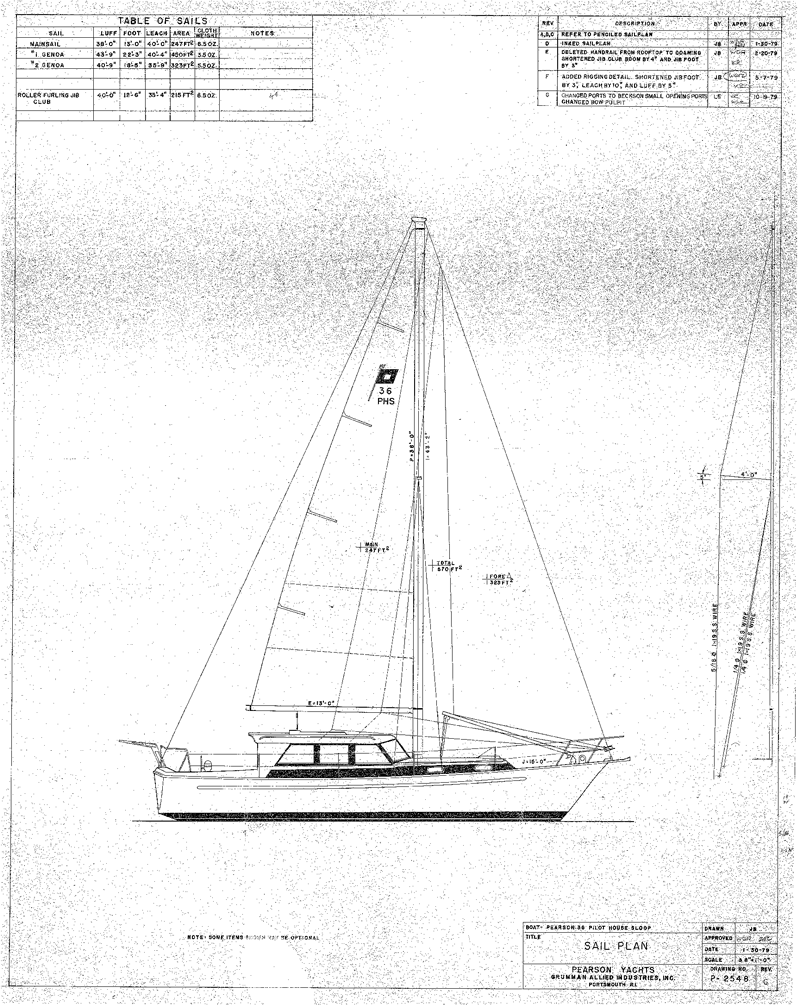 In most cases this is the overall length of the hull excluding such things as bow sprits, bumkins, etc.

Length Waterline or Load Waterline (length waterline is more common usage). This figure more closely represents the usable size of the yacht and is a necessary figure in other calculations.

Design Waterline or Datum Waterline. This represents the waterline that hopefully the yacht will float at, based on the designer's estimates of the various weights that go into the boat. LWL or DWL are frequently used interchangeably.

The amount of water displaced by the hull for a given condition of loading. Sometimes it refers to the design displacement which includes the weights calculated for that condition, or it may be the half load displacement, i.e., half fuel, water, stores, crew etc. It may also be the full load condition. As listed in the brochures or the publications, unless defined, it usually means design or half-load displacements. If someone is trying to promote a hot racing boat, the lightest condition is often used. The displacement is also given in pounds in cubic feet salt water and sometimes in long tons (2240 lbs).

This is normally given in square feet as the sum of the mainsail + mizzen + 100% of the foretriangle. The area of the foretriangle is simply that area bounded by the fore side of the mast, the headstay and the deck. Again, we find different approaches to this calculation. Some listings will contain the area of an overlapping genoa instead of the 100% foretriangle.

In simple terms, the total area of the hull and appendages in contact with the water. In addition to the hull, we include the keel, rudder, prop shaft, prop skeg and centerboard if one is present.

This ratio is useful as a measure of light air performance. The wetted area represents the frictional drag which must be overcome by the driving force generated by the sail area. The higher the number, the better the light air ability of that design.

This ratio tells us if a given design is heavy, medium, or light weight. To simply say a boat is heavy or light is meaningless unless we know something about its size. For example, a 30 footer weighing 15000 lbs would be on the heavy side, whereas a 40 footer weighing the same is light.

The sail area to displacement ratio is a bench-mark to evaluate light air performance as well as heavy air conditions. Think of the sail area as our engine or driving force, and the displacement as our resisting force, the drag. Again, the higher this ratio the better the performance will be in heavy air. At higher boat speeds the total resistance grows rapidly and, in addition to the frictional drag, we have a tremendous increase in the wave-making drag. To visualize this, picture a sailing yacht on a reach in a fresh breeze with a large bow wave a hollow amidships and a large stern wave. Achieving speed under these conditions requires a high ratio of sail area to displacement.

In yacht design, we must know how stiff the boat is, i.e. how much she will heel over in a given amount of wind. This coefficient assumes a 15 knot wind which translates into a pressure of approximately 1 lb. per sq. ft. The lower the number, the stiffer the boat is. Depending on the boat's size, designers assign different values that they want to achieve. For example, in a 15 knot wind you would expect a small boat like a Blue Jay to be railed down at times, whereas a 60' might heel only a few degrees. If you redesigned the small sailboat to heel only a few degrees in 15 knots, the boat would be a complete dog in light air. Conversely, you would not want to increase the sail plan on the 60 footer to the point where it would go rail down.

Also "coefficient of fineness" tells us something about how the underwater hull volume is distributed fore and aft. For example, the prismatic coefficient for a barge that is shaped like a big box is 1.00. The PC for a racing shell might be around 0.45. The PC for a high-speed power cruiser is around 0.67. The value of the PC has a relationship to the wave-making resistance. Knowing the speed at which the boat is to operate, there is an optimum PC to minimize this resistance. Choosing the best PC for a sailing yacht is more difficult because speed varies with conditions.

Brochures or publications will often include various ratios used by designers to evaluate the merits of their design as compared to others.